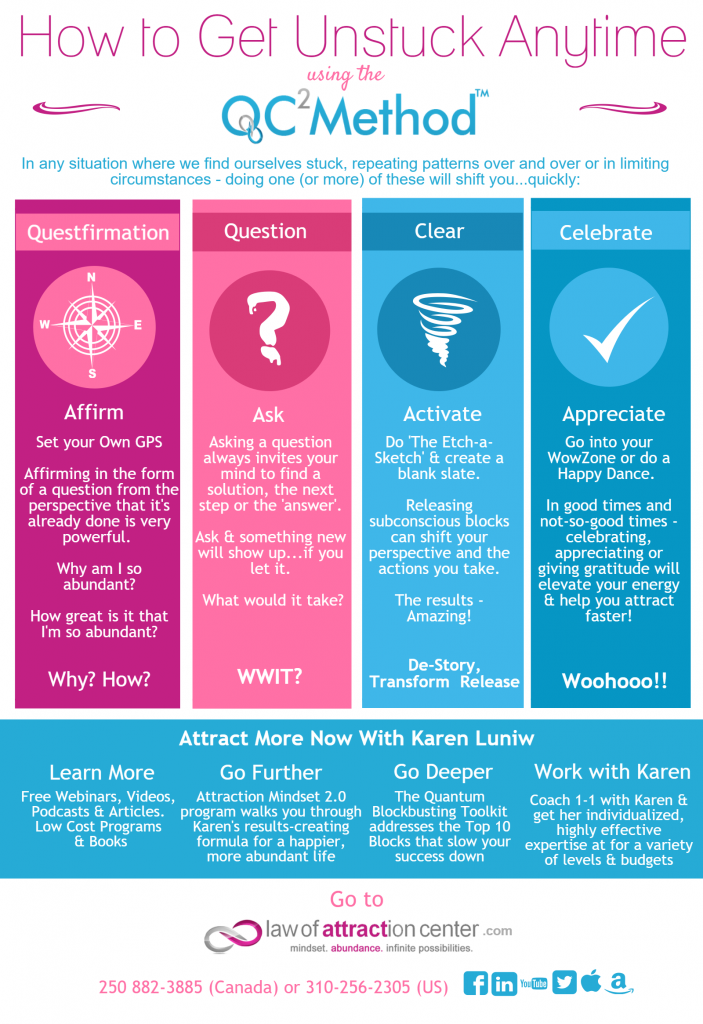 Why the QC2 Method?

In 2013 I realized I was doing something special with my private coaching clients that was helping them to make some dramatic shifts in their mindset that was creating crazy-amazing opportunities in their lives in shorter periods of time than ever.

I decided at that point that I better identify exactly what was going on and realized I had been using and teaching a number of techniques together that was helping to dramatically shift limiting and negative beliefs quickly.

People were taking actions on things that previously they had procrastinated about or had been fearful about trying.  They were feeling more confident, making better decisions quicker and overall were happier.  On top of that, many were making more money, getting better jobs or attracting more (and better) clients!  Some were finding their soulmates or were experiencing more love and better communication in their current relationships.

I soon realized the core elements (of the 60+ tools I use) were these four tools.

Of course, these tools already existed but like putting all the right ingredients together to make the most tasty and amazing recipe - this was the recipe of something akin to magic.

At any given time when you're feeling stuck or down or blocked, you can pick one, two or all four of these tools to shift you - often in moments.  And, because there are only four tools - they are easy to remember.

That's where QC2 Method (said as Q C two or Q C squared - either works) name developed from - there are two tools that start with Q and two that start with C.  (I originally called it QQCC but, that wasn't sexy enough - lol - so QC2 was born.)

Ultimately, it's not rocket science but that's why it works.  It's easy to remember in those moments when nothing seems to be going the way you want it to.  And THAT is exactly when you know you should use the QC2 Method - when you feel stuck, you need an answer, you want things to change or you want to feel better.

You can search on this site for articles or my Podcast site for podcasts where I talk about QC2.

You can also get a more in-depth explanation in my latest book/journal called:  The Law of Attraction in Action:  A Year of Wow Daily Attraction Journal.  You can get it at